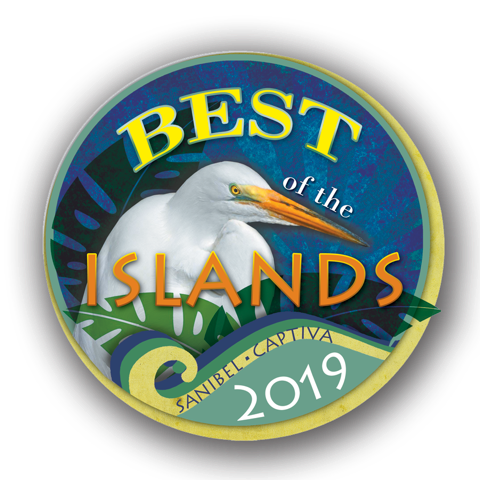 If you're looking for a Sanibel fishing report from a local and trusted source, you've come to the right spot! The fishing on and around Sanibel is GREAT right now! Captains Whitney, Jarrett & Nate, along with shop manager Jim, have reported the fish are active and biting. Red tide has dissipated, making it a good time for all!

With the water temperatures cooling down (Avg. 70°), we're starting to see some of our favorite winter species show up. Below you'll find a breakdown of what we're catching, how we're catching it and where we're catching it. Call our Sanibel fishing shop with any questions and stop by for all your bait and gear needs!

Just about anywhere along the shores of Sanibel you can catch Whitings - they're one of the most frequently caught fish from the Florida surf. The whiting is popular because of its very lightly flavored white meat. Whiting average a little less than a pound but have been known to reach over two pounds. They look similar to a redfish but don't have the spots and have whiskers. If you're vacationing on Island, this is a sure bet and good eating too! Whitings bite on live shrimp, dead fish & fish bites.

One of the most popular fishing holes on Sanibel & Captiva is Blind Pass and it's been a great spot for Pompano, Red Fish, Speckled Trout & Snook over the past couple of weeks. We're catching Snook with live pin fish, shrimp & white bait. They'll also bite artificial lures. Come in for Z Man, live target swim bait, flarehawks & bucktail jigs! We've got you covered on live and artificial bait at Whitney's! (Snook are catch & release ONLY!) When you come in, make sure to check out the GIANT, 52-incher Whitney caught at Blind Pass up on our wall and ask him to tell you the story!

Next up at Blinds are the speckled trout (spotted seatrout)! While these trout are catch and release (until further notice), they're still a great catch! They're going after live bait on a Carolina jig or they're jiggin' D.O.A C.A.L paddle tails & GOT-CHA curl tail grubs. We've also been catching these out on our charter but we'll get more into that later on... 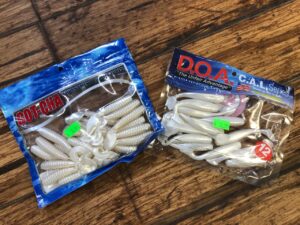 Then we've seen some Pompano who like to go after pink jigs (banana jigs). They're a native species with a minimum size limit of 11" (they can get up to 25"). Pompano are open year round but have a daily bag limit of 6 per person. We've seen them at Blind Pass and around the Sanibel Fishing Pier.

The local favorite, Redfish, have also been frequent at Blind Pass and love live shrimp, live pin fish, cut lady fish, cut threadfin hearing, cut finger mullet. They'll also go after artificial paddle tail swim bait, gold spoons & live target shrimp. They're one of Florida’s most popular sport fish and the state’s most widespread estuarine fish (Redfish season is closed - catch & release only). The occasional Black drum has been caught up around the river recently. Ask our Sanibel charter captains about it when you come in to gear up or book your fishing charter.

Last on the list for recent shore fishing are Sheapshead which can be caught by casting out to bridge & dock pilings along the beaches. They'll bite on fiddler crabs and live or fresh dead shrimp. They'll sometimes take a piece of frozen bait but you'll never catch them with flies... Our buddy Eric recommends 20lb Yo-zuri fluorocarbon leader line for fishing for these. While the record for Sheapshead in Florida is 15lbs, you'll most commonly see them weighing much less and measuring around 13". 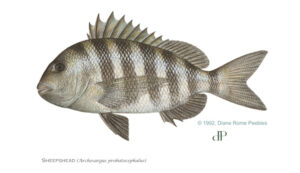 If you're fortunate enough to get out on the water (we'll take you!), you'll run into tripletail whose season is open year round, has a minimum size limit of 18" and a daily bag limit of 2 fish per person. Tripletail like our live shrimp and flies. Whitney recommends a shrimp pattern fly or bait fish pattern fly - both of which we have at the shop! They're often found near structure and when hooked will seek to escape by heading hard for shelter. 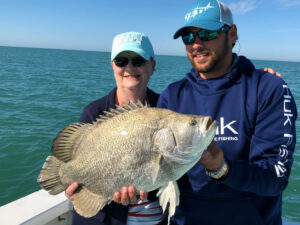 We've also been catching Bonita & Spanish Mackerel in the boats. They're going after gold and silver spoons, as well as flies.

The Mangrove Snapper have also been biting! We're catching them offshore around the wrecks and occasionally at Blind Pass from shore. They seem to like live bait - primarily white bait, pin fish or live shrimp and squid. They are common at about 24" and 8-10lbs.

Grouper (red & Gag) are also offshore. We snag them with pinfish and squid. Grouper fishing from a boat typically involves baits fished near the bottom, with heavy tackle and heavier to bring grouper to the surface. Live fish or dead cut or whole bait are used. When you're out on one of our Sanibel charters, we've got everything you need to catch these and all the other fish so no need to worry about what to bring as far as gear and bait. Grouper are very tasty meals and our captains will filet them for you to take back for a meal.

Over the next few weeks we'll start to see amberjack (greater), barracuda & king mackerel popping up offshore. Amberjacks go after live pin fish, blue runners, white bait and then vertical jigs, bucktails, top water plugs and z-man's for artificial bait too. They're out of season until August 1st so you'll have to toss 'em back for now! They're common at about 40" & 40lbs but the state record is 142lbs, which was caught down towards the Keys. FWC says, "Anglers typically use 50 to 100 pound tackle, but lighter tackle can also be used in many situations. Amberjack are not shy or picky, so you can make all the noise you want, and almost any lively baitfish will be readily accepted. [...] Because amberjacks like to swim around above the reef, it’s a good idea to use just enough lead to keep the bait in the middle of the water column. [...] Amberjack are extremely strong fighters with great endurance. To avoid lost or broken tackle, it’s important to have the drag pre-set to match the strength of the angler and the equipment." 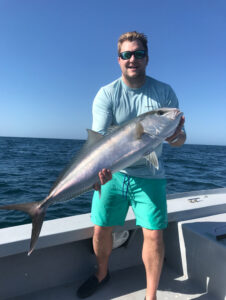 Barracuda like the white bait and pin fish too. They will go after cuda tubes, yo-zuri & X-rap's. There's no size limit on these, they're open year round but there's a limit of 2 fish or 100lbs, whichever is more.

And last but not least are King Mackerel. Kings feed on small fish and squid and take both natural and artificial baits. Live baits include white bait, blue runners & pin fish. Lures should be flashy sub-surface lures or large fish-like plugs - we love Yo-zuri, x-raps & cedar plugs. Use 20-pound line and tackle, or heavier for larger kings, with a wire or mono leader. King Mackerel are open year round and have a 24" fork length size limit. The state record is 90lbs and this beast was caught near Key West.

Whatever & wherever you're fishing, we are always happy to give you insight! Whitney prides himself on being honest with anyone who asks! If you want the truth, the whole truth and nothing but the truth, call us or stop in and you're sure to get it! Our charters run 365 days a year for guests wanting to get out on the water with one of our skilled charter guides and captains. Voted 'Best Fishing Charter' & 'Best Charter Captain', we're sure you'll love your experience & that we'll get you #HookedOnSanibel

View all posts by: