We get asked all the time, when is the best time of year to fish in Southwest Florida?  The truth is, there really is no “best” time of the year to fish in Southwest Florida; with our sub-tropical climate the fishing is great all year around.  There are better times of the year for some species of fish than others, for example, tarpon are more plentiful during the spring and early summer months than the fall or winter.  Redfish, spotted seatrout, and sheephead don’t mind the cooler water temps of winter, neither do ladyfish or jack crevalle.  Both spanish and king mackeral can be found at times along the beach, along with bluefish and tripletail.  Something is always biting.

The information below is subject to change without notice. Check the Florida Fish & Wildlife website for up to date regulations.

Season: Closed Dec. 1-end of February and May 1-Aug. 31 NOTE: All state waters from the Pasco/Hernando county line through Gordon Pass in Collier County is catch-and-release ONLY through Aug. 31, 2019

News: Snook and redfish are catch-and-release only in areas affected by red tide. This includes all state waters from the Pasco/Hernando county line south through Gordon Pass in Collier County, including all waters in Hillsborough County. This temporary change remains in effect through May 10, 2019, but snook will remain catch-and-release through Aug. 31, due to a regularly scheduled annual season closure. FWC plans to discuss the impacts of red tide on these fisheries at the May 1-2 Commission meeting.

REGULATION CHANGE:
Starting Feb. 22-May 10, 2019, recreational anglers will no longer be able to harvest spotted seatrout over 20 inches total length when fishing in state or federal waters from the Pasco-Hernando county line south to Gordon Pass in Collier County. This is a proactive change to conserve spotted seatrout impacted by the prolonged red tide in southwest Florida. While these species need additional time to recover, the red tide that was impacting southwest Florida has subsided.

Minimum Size Limit: More than 15" and less than 20" total length (may possess one over 20 inches included in bag limit)

Minimum Size Limits: 15-36" fork length with 1 fish greater than 36" per person or vessel per day

Minimum Size Limit: Cannot be less than 14" or greater than 22" fork length

Daily Bag Limit: 5 per person aggregate of the two species

Gear Requirements: Legal Gear - hook and line and spearing only

News
Snook and redfish are catch-and-release only in areas affected by red tide through May 10, 2019. This includes all state waters from the Pasco/Hernando county line south through Gordon Pass in Collier County, including all waters in Hillsborough County. 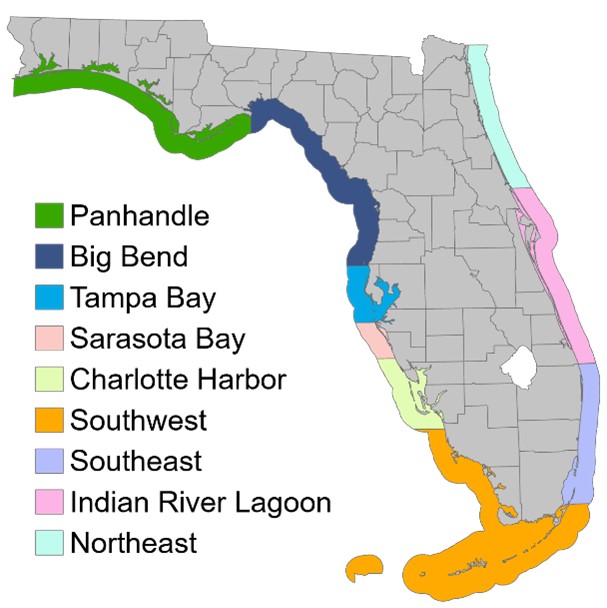 All state waters from the Pasco/Hernando county line through Gordon Pass in Collier County is catch-and-release ONLY through May 10, 2019

6 fish per person transport limit applies when traveling in a vehicle on land away from a fishing site.

Must remain in whole condition until landed ashore

Minimum Size Limit: None. Tarpon over 40 inches MUST remain in the water

Daily Bag Limit: Tarpon is a catch-and-release only fishery. One tarpon tag per person per year may be purchased when in pursuit of an International Game Fish Association (IFGA) record. Vessel, transport and shipment limited to one fish.

Tarpon Handling Guidelines
Tarpon is an iconic saltwater fish. When handled properly, these large fish are more likely to survive and evade predators. Follow these guidelines to ensure tarpon remains the strong and viable fishery it is today.

Keep head and gills in the water

If the weight can slip down the shank to the bottom of the hook, as demonstrated in this video, it is prohibited.

During the months of April, May and June, no more than three fishing lines may be deployed from a vessel at any one time.

During the months of April, May and June, no person shall use, fish with, or place in the water any breakaway gear.

Vessel Limit: 50 per trip during March and April

Vessel Limit: No more than 2 per vessel

Slot Limit: Not less than 11" or more than 22" fork length; may possess 1 over 22" included in the per person bag limit

Vessel Limit: No more than 2 over 22" per vessel

Regulations include weakfish-like fish such as sand seatrout and hybrids of the two.

Daily Bag Limit: 5 per harvester per day (can include one over 24")